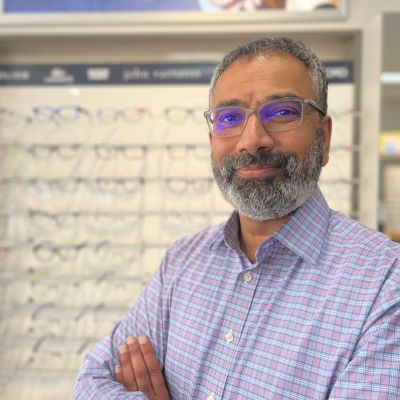 Rupen is originally from England and moved with his family to Tasmania in 2012.

He started out his career as a dispensing optician after completing his FBDO diploma in Dispensing Optics and went on further to study Optometry at City University in London, graduating in 1998. Rupen worked as a locum for 10 years in the UK, during which he was also a Clinic Supervisor at the City University Eye Clinics. In 2009 he joined Jon Sames Optometrists in Essex, where he specialized in contact lenses and diabetes.

When Rupen joined Eyelines, he became the resident optometrist at the Prospect store until 2019, when he made the move to the Launceston store, where he is currently based.

Rupen enjoys all aspects of optometry in particular contact lenses and eye disease.

When relaxing Rupen enjoys walking his dog, good book or spending time with friends and family in Tasmania.

showing 1-12 of 'All Optometrists'